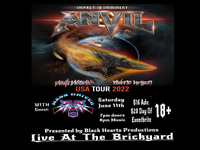 Black Hearts Productions is Proud to host one of the most legendary and influential band in all of metal, ANVIL. Formed in 1973, Anvil has been cited as influencing such bands as such as Megadeth, Slayer, Anthrax, and even Metallica. In the 80s they toured with bands like Motorhead and Aerosmith, and since their critically acclaimed documentary they have revitalized their careers and spent the last decade touring with bands like AC DC, Saxon, and Alice Cooper. With a prolific career spanning nearly 50 years and 18 albums, we are proud to host them on their solo tour at Brickyard Bar and Grill. Tour Support White Wizzard (New Wave Of Trad Metal) Midnite Hellion (Jersey Heavy Metal) Local Support Mass Driver (Fuzzed Out Rock N Roll) $16 Advanced / $20 Day Of Show -Eventbrite 7pm Doors / 8pm Music 18+